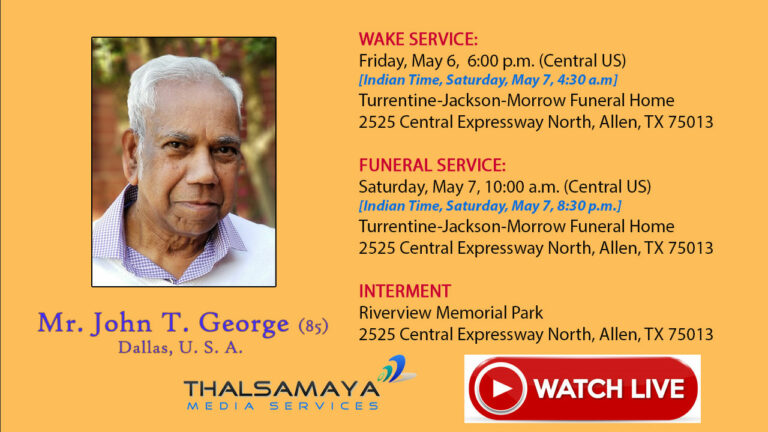 He is survived by his wife of 54 years, Annamma; his children Philip with his wife Liz, Betty with her husband Mat, and Lena with her husband Jeevan; his 6 grandchildren: Jordan, Caden, Naomi, Andrew, Elijah, and Levi; his brother T.J. Mathew in Bengaluru, India; and many other loving family members. He was preceded in death by his parents K.V. John and Mariamma, and sisters Thankamma, Chinnamma, and Grace.

James was born in Mylapra, Kerala on January 10, 1937, as the youngest of five children. He became a follower of Jesus Christ in his teen years and was faithful to God and His Word.

He graduated from college in India and then moved to Kuwait for employment. While in Kuwait, he met Annamma and they were married on July 26, 1968. By 1973, they immigrated to the US and first lived in Houston, Texas before settling in the Dallas area in 1984. Wherever the Lord led, James enjoyed the fellowship of believers of the local church.

James was such a wise and gentle soul who was committed to prayer and Bible reading. He enjoyed attending church and supporting evangelists in India. Among his hobbies, James enjoyed reading books, growing vegetables with his wife, exercising, and traveling. He enjoyed a good laugh, the Dallas Cowboys, and choosing to live in peace with everyone. He was a faithful and loving husband, father, and grandfather who will be deeply missed.

For we walk by faith, not by sight but we are of good courage and prefer rather be absent from the body and to be at home with the Lord. Therefore we also have as our ambition, whether at home or absent, to be pleasing to Him.